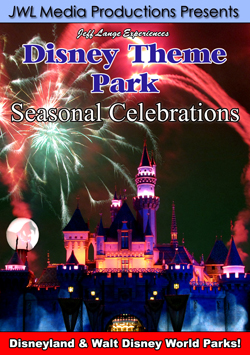 Jeff Lange brings you this latest DVD in a series that features one-of-a-kind experiences that you can only find in the Disney theme parks!

Join the Easter Bunny and friends at Walt Disney World’s Magic Kingdom as they lead a procession of floats, unique characters and colorful Southern belles in this vibrant display of pageantry. Chicken Little, Abby Mallard, the White Rabbit, Rabbit from Winnie the Pooh and Thumper wave from an Easter float, while Daisy wears her Easter finest! Shot from Main Street USA and Frontierland.

Disney’s Celebrate America! A Fourth of July Concert in the Sky (Magic Kingdom, 2010)

This patriotic arrangement of music and fireworks has delighted audiences on Independence Day since the show debuted in 2008. The four acts include: The Introduction, Celebrate Freedom and Independence, American Folk Songs, and A Salute to the Red, White and Blue. It’s hard not to get a lump in your throat as the narrator guides this spectacular presentation to it’s awe-inspiring conclusion!

Halloween Screams – A Villainous Surprise in the Skies (Disneyland, 2009)

This immensely popular Halloween fireworks show is a dramatic showcase of sights and sounds, and features Zero from “The Nightmare Before Christmas” floating past Sleeping Beauty castle! Jack Skellington, Ursula, and Oogie Boogie appear on a large sphere alongside the castle, and they help narrate each segment of the show. Experience the grandeur of this hauntingly stunning fireworks spectacular which made it’s debut in 2009.

Unique to Animal Kingdom, this festive parade features larger than life interactive puppets, graceful animal-inspired floats, and many of your favorite Disney characters in this jubilant celebration of the holiday season! Highlights include: Mickey and Minnie in their safari outfits, Santa Goofy, Donald Duck’s float with falling snow, Baloo, Rafiki, Brer Bear, Pluto and more!

“Let There Be Peace On Earth” Fireworks Finale (Epcot, 2009)

Illuminating the night sky with a stunning array of pyrotechnics, this ending tag to Illuminations: Reflections of Earth offers us the message of “Peace on Earth, Good Will to Men”. Recorded during the first showing on New Years Eve.

Ring in the New Year with this amazing fireworks extravaganza, featuring a mind-boggling array of pyrotechnic effects exploding above and around Disney’s Hollywood Studios!

Relive these special Disney celebrations year after year or experience the magic for the first time by purchasing a copy of “Jeff Lange Experiences: Disney Theme Park Seasonal Celebrations”.