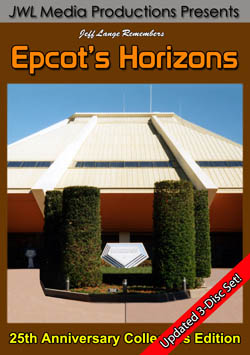 Jeff Lange takes you on a trip back in time to celebrate Epcot’s 25th Anniversary. This updated 3-Disc edition features the Future World classic attraction “Horizons”, Presented by General Electric.

This incredible video was recorded with an audio mixer and two microphones to capture the sounds in front of you and the narration from the speaker behind your head. Features full coverage of the exterior, queue & load area, all your favorite ride scenes, a visit to the space station “Brava Centauri” plus the original General Electric exit displays.

Travel to the desert farm of “Mesa Verde”.

Visit the “Sea Castle” research base.

View the complete OMNIMAX loop (not possible on the ride itself) showing modern technologies and ideas that could be used to build the world of tomorrow.

A complete ride from the pavilions last full year of operation. All references to General Electric have been removed.

A photo montage of over eighty vintage images.

A bonus ride on the Future World classic.

Features extended coverage of the exterior, queue and load area, the full ride, and the original General Electric exit displays.

A previously unreleased complete ride! Includes full coverage of the exterior, queue, load area and exit displays with all references to GE removed.

Another previously unreleased complete ride, featuring all of your favorite scenes shot from new angles.

The replacement attraction for Horizons was Mission Space, opening in 2003. This segment features extended coverage of the exterior, queue and load area, pre-show, the full ride, and post-show exhibits and displays.

For those customers who already own the “Horizons 2-Disc Set”, we offer an upgrade package HERE!

Click HERE to browse all Epcot DVDs including the 25th Anniversary series!

This item qualifies for free shipping on your entire order.