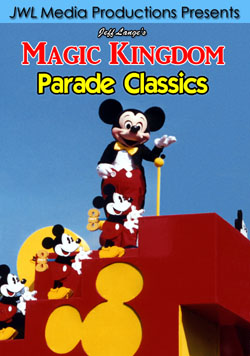 Stilt walkers and acrobats accompany a variety of floats in this Mardi Gras influenced procession, celebrating the Magic Kingdom’s 20th Anniversary! Marvel as Mickey, Minnie, Donald, Goofy and Roger Rabbit  appear as gigantic cold air balloons towering nearly 40 feet above Main Street USA. The parade was shot from multiple camera angles so you don’t miss any of the action!

More than 100 performers dressed in Mickey Mouse inspired costumes and 28 Disney characters join floats and balloons in this lively parade! There are six major themes to the parade, designed to showcase Mickey as seen in merchandise, movies and theme parks from all over the world. These themes are: Mickey in Music, Time, Motion, Toys, Balloons, and Images over the Years.

This beloved parade celebrated the 25th Anniversary of the Magic Kingdom, and was shot  in a location that allows you to enjoy three special parade stops! Six unique floats are flanked by characters and dancers: “Remember the Magic” Theme Float, “The Little Mermaid”, “Beauty and the Beast”, “Aladdin’s Treasure”, “The Lion King” and “The Enchanted Forest” (featuring the first Walt Disney World parade to shoot fireworks from a float).

In celebration of Walt Disney’s 100th Birthday, this parade featured giant snow globe floats and included an interactive performance parade stop! The floats feature the following themes: “It Was All Started By A Mouse” (Mickey Mouse), “Wish Upon A Star” (Pinocchio), “A Thousand Dreams To See” (Aladdin), “Face The Darkest Fears” (Disney Villians), “A Dream is a Wish Your Heart Makes” (Prince and Princess) and “As Long as There is Imagination Left in the World” (assorted characters)!

Relive these special Disney parade memories year after year or experience the magic for the first time by purchasing a copy of  “Jeff Lange’s Magic Kingdom Parade Classics”.