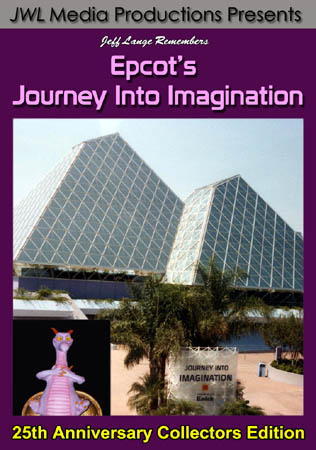 Jeff Lange takes you on a trip back in time to celebrate Epcot’s 25th Anniversary. This fifth in a series, features the Future World classic attraction Journey Into Imagination, Presented by Kodak.

Journey Into Imagination presented by Kodak (1993)

This incredible video was recorded with an audio mixer and two microphones to capture the main narration plus the sounds of the background audio effects. Features full coverage of the exterior, que & load area plus all your favorite ride scenes.

The Image Works – Creative Playground of the Future (1992)

Walk thru the Sensor Rainbow Corridor and the Stepping Tones. Watch Figment demonstrate how to draw Dreamfinder’s beard on the Magic Palette video screens. Experience Dreamfinder’s blimp race, the pin tables and more.

This ride thru was recorded from a different perspective to capture alternate scenes not always noticed on the attraction.

The second floor is illuminated for nighttime presentation. Complete coverage of Figment’s Coloring Book, plus a brief look at Making Faces, Dreamfinder’s School of Drama and Figments Kaleidoscope.

This ride thru is the earliest recording available.

A photo montage of over sixty vintage images spanning over a decade of memories. The slideshow features the attraction itself and the original Image Works.

Features close-up footage of Figment & Dreamfinder on the Dream Catcher.

Journey Into Imagination Presented by Kodak (1995)

This was my final recording of the original version of the attraction.

Journey Into Your Imagination Presented by Kodak (1999)

Take a tour of the Imagination Institute before the official opening and be test subjects for the new invention, The Imagination Scanner. This recording features full coverage of the exterior, que & load area.

Preview the Kodak “What-If?” Labs before the official opening.

Journey Into Imagination with Figment Presented by Kodak (2006)

Over One Hundred and forty Images featuring the new attraction, details of the upside down rooms, hidden Figments, the Image Works, Props, Figments place plus a rare look at the original second floor Image Works location as it exists today.

This item qualifies for free shipping on your entire order.