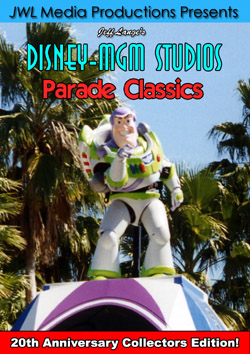 Jeff Lange takes you back in time to experience this first in a series of DVDs featuring vintage parades from the Disney-MGM Studios.

“Ladies and gentlemen, filming right now in front of the Chinese Theater is our Surprise Family for the day, the Sinclair family from La Brea, California!” More of a street party than a parade, the stars of the hit TV show Dinosaurs sing and dance in front of the iconic theater.

As Aladdin’s Royal Caravan approaches Hollywood Boulevard, you’ll be magically transported to Agrabah! This critically acclaimed parade features a 32-foot tall Genie, as well as the grand entrance of Prince Ali, spitting camels, and the highlight is Aladdin and Jasmine on top of Abu in the form of a giant elephant!

Led by green army men dancing in precision to “You’ve Got a Friend in Me” (culminating in an Iwo-Jima stance), this lively parade features all of your favorite Toy Story characters, including Buzz Lightyear and Mr. Potato Head. The parade ends with Woody fronting a float brimming with toys, including an Etch-A-Sketch vividly proclaiming “The End”!

Enjoy this special opportunity to view the Toy Story Parade floats up close and personal on New York Street!

This unique parade begins with Mushu on the back of a bicycle cart, and includes an extended-length dragon with a body symbolizing the Great Wall of China! Brandishing knives and showcasing their sword moves, the Huns precede a giant inflatable Shan Yu, who is tied to a bed of skulls and fireworks! Mulan and Captain Li Shang are pulled by a horse-drawn carriage beautifully adorned by Chinese symbols, and the parade concludes with a larger-than-life Emperor waving to the crowd!

This short-lived comedy stunt show is presented here as a rare bonus!

Relive these special Disney parade memories year after year or experience the magic for the first time by purchasing a copy of “Jeff Lange’s Disney-MGM Studios Parade Classics”.