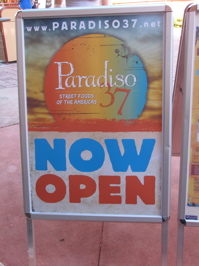 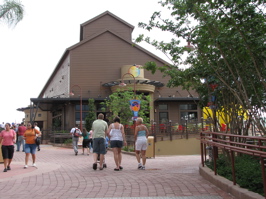 Folks walking up Hill Street at Pleasure Island this week were greeted by new background music and A-Frame signs promising a new dining location would be “opening soon”. “Soon,” it turned out, was yesterday at 11am when Paradiso 37 officially opened to Guests. The 37 has a double meaning. Not only does the menu ambitiously (and successfully) attempt to represent 37 countries in North, Central, and South America, but their two-story-tall Tequila Tower contains 37 varieties of tequila! 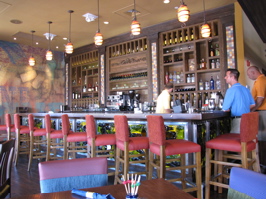 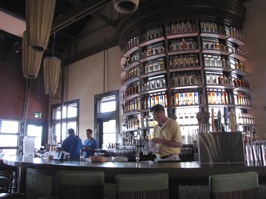 While I’m sure that most of you, like me, will be glad to see *anything* open in Downtown Disney’s “Warehouse District“, I have heard a few rumors that I feel need to be cleared up. First, I had heard from multiple sources that ‘37‘ would be a quick service or food court-style location (probably based on their subtitle, “Street Foods of the Americas“). This is not so! It is a casual dining location. The price points, however, are very reasonable for Downtown Disney (especially considering that their closest neighbor is Raglan Road.) Secondly, many have assumed that Mexico would be the only North American nation represented on the menu. This too is an idea you should brush aside. I’ll address the menu in a moment, but know for now that the United States is very well represented. Another worry I’ve seen expressed is that there would be some overlap in menu items between this E-Brands location and Bongos Cuban Cafe, due to many Latin American influences. Again, I say, don’t worry! 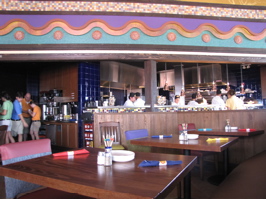 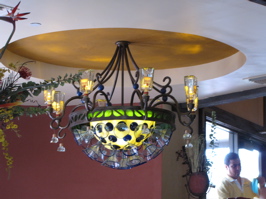 To call the menu at ‘37‘ eclectic is an understatement. Just looking at the appetizer section made my head spin! They offer everything from fried macaroni and cheese and corn dogs to a shrimp seviche and freshly-made tortilla chips with a variety of dips. Main courses include a variety of sandwiches (grilled mahi, bbq chicken, or Carolina-style pulled pork sliders) and salads, along with heavier fare such as a burrito platter, Argentinian skirt steak, and a Colombian-style crispy hen. The skirt steak is also available paired wth grilled shrimp to create ‘37‘s own version of “Surf and Turf“. This menu can definitely satisfy both the pickiest members of the family, and people who have previously had to leave WDW property to get fish tacos with cilantro rice, as well as folks with varying budgets. Paradiso 37 has one menu for both Lunch and Dinner. Desserts also run the gamut from the familiar (4 mini ice cream cones) to the familiar with an exotic twist (an ice cream sundae served in an edible coconut half with chocolate-dipped bananas), to the familiar end of exotic (sopapillas and churros). An extensive list of wines, beers, and mixed drinks is also available. 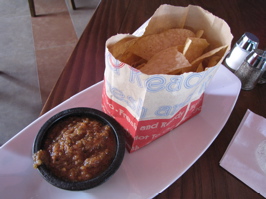 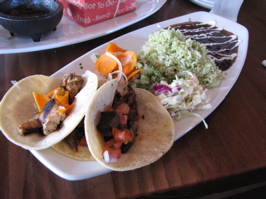 Paradiso 37 also makes the most of its location. Indoor seating spans the large open dining room that was formerly DTV, Missing Link Sausage Co, and Suspended Animation. Floor to ceiling windows (as well as glass doors that can be opened to let fresh air in during the mild fall and spring months) give a bright, tropical feel to the restaurant. Outdoor seating offers views of Village Lake or excellent people-watching on Hill Street (which will be more exciting as time goes on. I have been assured that ‘37‘ will have more neighbors moving in before the end of the year). Live bands and a DJ will entertain guests on the patio in the evenings. 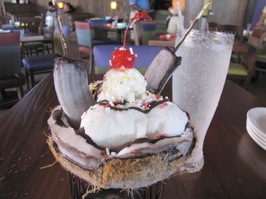 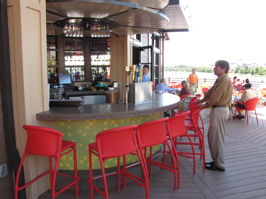 Paradiso 37 is owned and operated by E-Brands, operators of Salsa and Samba Room, among other locations across the country. Disney Cast Members receive a 20% discount at lunch and dinner.

Thank you again to Steve!

We also have another review by Denise from site partner Mousesteps.com:

Several years ago, Raglan Road opened at Pleasure Island – bringing in good food and fun entertainment, and it’s been the one bright spot on the Island since the clubs closed late last year. Paradiso 37 is now helping to fill the void left between the Marketplace and the West Side…

You can read more at Mousesteps.com, HERE!

Jeff Lange turns back the clock to 1986, where you will experience Walt Disney World through the eyes of Disneyana documentarian Bob Welbaum. This incredible vintage footage includes select narration from Mr. Welbaum, who shot this video before recording was commonplace.

Celebrate spring at one of Disney’s most anticipated events of the year: The Epcot International Flower and Garden Festival 2009.

Experience these unique panoramic displays throughout Epcot’s  Future World and all around World Showcase!

or to purchase this item,

Jeff Lange takes you on a trip back in time to experience classic Disneyland attractions. This fifth volume in the series features the following:

For more information or to purchase this item, please click HERE.

Jeff Lange takes you to Walt Disney World’s Magic Kingdom to experience the best of all the “Wishes” nighttime fireworks spectaculars!

For more information or to purchase this item,

As always, if you want to request a future DVD idea, Photo Memory topic or comment on anything, just drop me a line at suggestions@JeffLangeDVD.com.