Hello everyone and welcome back for another Photo Memories
update. As we are about a month away from
Epcot’s 25th Anniversary, I have decided to feature some vintage
pre-opening photos. On October 1, 1979
Epcot Center had it’s official groundbreaking and begun construction. As
the official Oct 1st 1982 Grand Opening approached, a free Epcot Center
Monorail Preview was offered to Florida residents and
Walt Disney World resort guests.

My family was staying at the
Polynesian Village Resort and were notified upon check-in about this
complimentary preview. We acquired our tickets at the Magic Kingdom (in
the Epcot Center Preview Center located where the Walt Disney Story was
usually shown). I remember boarding a monorail at the Ticket and
Transportation Center and circling
World Showcase for the first time. I was amazed by what I saw next!

It was truly awesome to see the huge
Epcot Center layout and the massive construction going on as we slowly
glided to our destination, the Epcot Monorail Station. We were then able
to disembark the train and view displays and concept art of this
exciting and inspiring new type of theme park! Disney cast members where
stationed on the platform answering questions and explaining what the
park would be like when it opened! We were also allowed to take photos
from the platform of the finishing touches being made to
Future World.

The shot above shows
Spaceship Earth before the installation of the mirrors on the base. Also
note in the foreground the entrance fountain can be seen without the
Epcot logo acrylic centerpiece. 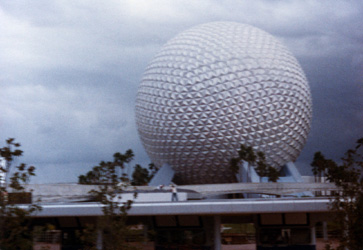 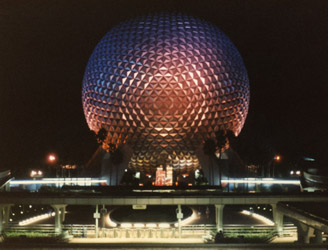 My entire family was very excited by this sneak peek and we would return
later that year soon after
Epcot Center opened on October 1st, 1982! The Opening Day Dedication was
as follows:

"To all who come to this place of joy, hope and friendship, welcome."

"Epcot Center is inspired by Walt Disney’s creative genius. Here, human
achievements are celebrated through imagination, the wonders of
enterprise, and concepts of a future that promises new and exciting
benefits for all."

"May Epcot Center entertain, inform and inspire. And, above all, may it
instill a new sense of belief and pride in man’s ability to shape a
world that offers hope to people everywhere."’

I look forward to being there again twenty five years later as part of ‘
The Epcot Thing‘ 25th Anniversary fan event! I will have much more
information on this great event plus announce some special guests in the
coming weeks!

JeffLangeDVD Travel Update: I am once again traveling to
Walt Disney World this week to record video footage for future projects
and assist in the final planning of the ‘
Epcot Thing‘ event. As always, while I am traveling you will still receive
the same level of quality service and guaranteed 24 hr shipping you have
come to expect from JeffLangeDVD.

JeffLangeDVD Production Update: I am currently working on my
Epcot’s 25th Anniversary series with ‘Communicore & The Living Seas‘
, ‘World Showcase‘ and ‘Epcot’s Millennium Celebration‘. I will
also be continuing my ‘Class
of‘ series with ‘Walt Disney World: Class of 1971’. Check back soon
for a ‘Special Collectors Edition’ of a very popular retired attraction
that will include an actual piece of the ride and a vintage photo
suitable for framing. For more details and release information please
check JeffLangeDVD.com. I have included a subtle hint below.

Please remember, if you want to request a future DVD idea, Photo Memory
topic or comment on anything, just drop me a line at
suggestions@JeffLangeDVD.com.