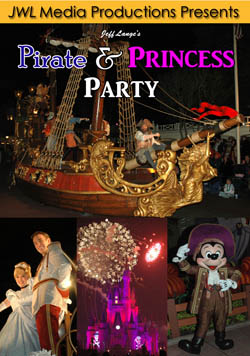 Your evening of adventure begins with a walk down the red carpet where you are sprinkled with magic pixie dust to prepare you for all that awaits!

Learn about pursuing life in the pirate trade from Captain Jack Sparrow and his first mate Mack.

Learn to master a magical invisible sword and become a member of the Royal Guard with help from Prince Aladdin. Remember to beware of the evil Jafar.

This may be the best fireworks show ever presented at the Magic Kingdom! Highlights include the Sleeping Beauty fairies color fight to have a blue or pink castle and the Pirates attempt to take over the castle ending in an all out battle featuring explosions on the castle itself!

Pick up a copy of ‘Jeff Lange’s Pirate & Princess Party’ today and relive all the magic or experience it for the first time.

Buy 2 or more titles from my store and recieve free shipping with no handling charges.